What Kind Of Walkie Talkies Do Police Officers Use?

Walkie Talkies And The Police

As technology has continued to develop, so has the type of walkie talkie used in the police force. While police officers may use many of the same brands available to the public, such as Motorola, Kenwood, Retevis, and Maxon, the main difference of police radios is the type of frequency that they operate on. An example would be the high power Retevis RT1 which can be purchased by civilians. 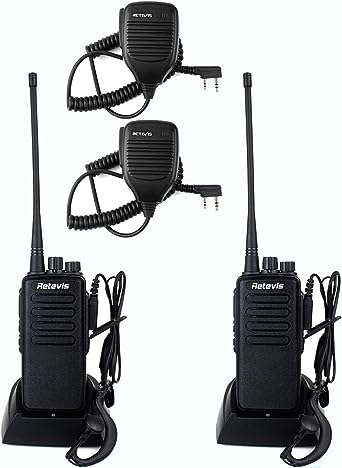 This walkie talkie is high powered and is similar in terms of its range, battery life, and design to many popular walkie talkie models used by the police. It also has the speaker mics and adjustable features which cops use when they are out on a patrol.

Some History of the Police and Walkie Talkies

Back in the 1930’s walkie talkies were first developed for use by field pilots, however, it was during World War II that they began to be used with more regularity as a staple of communication for military troops. As time has gone on, walkie-talkies have advanced to being much more portable and powerful than they were in their early years. One essential modern use of the walkie-talkie is in the field of public safety. By providing public safety officials, such as police officers, with a quick and effective means of communication, walkie talkies and two-way radios play a big role in keeping our communities safe.

When walkie talkies first started being used, each officer and patrol car were assigned a single frequency or channel that connected them to the headquarters. This had several drawbacks, however, as this style of communication prevented information from being sent out simultaneously to multiple units. Over time, these walkie talkies have become more powerful, feature-rich, and with longer range.

Technology has come a long way in the world of two-way radio communication, and these days police officers can be linked to the police headquarters while also having the ability to stay in communication with fellow officers. This allows officers to respond quickly and efficiently as calls come in.

Police radio transmissions are often encrypted and highly secured, which helps to keep the community safe by preventing criminals from listening in on official police communications.

Cutting-edge advances in police communication are continuing to evolve, and some areas are even beginning to use devices that have additional high-tech capabilities and can function in similar ways to tablets and cell phones.

There are a two main ways to listen to police transmission. One way is to buy a police radio scanner like the Uniden BC125AT and to tune into these frequencies. The other way lies somewhat in a gray area, but you can essentially modify a walkie talkie / ham radio and listen directly to unencrypted police walkie talkie transmission. The issue you run into here is that it can actually be illegal to transmit over these frequencies, so you have to be very careful.

So the answer is yes, you can buy a police scanner which will give you access to police and EMS channels. These devices are specifically designed to enable you to hear emergency channels and gain access to police, fire, and even air/ship frequencies. Most standard consumer walkie talkies will not allow you to listen in on the police, so finding a scanner which has access is key if you hope to gain access and listen to those emergency channels. Thus, there are certain ways that you can listen to police walkie talkie channels, but these can sometimes get you into trouble if you were to use it during a crime. For example, some savvy users have modified and used a Baofeng UV-5R to listen in to police, fire, and EMS transmissions which may be unsecured. However, be careful to not break any laws and check with your local authorities! You could also check out the Uniden BCD436HP below, which is a very popular handheld police scanner.

Can You Listen To Police Walkie Talkie?

The answer as to whether it is OK to listen in on cop radio calls is not always simple and can vary by state based on laws and regulations.

Police radios operate on specific frequencies that are often encrypted and reserved solely for official use. While there are police scanners available for purchase to the general public, they are often unreliable and difficult to use.

It is also possible to purchase frequency guides for emergency public services such as police and fire departments, however, it is important to note that it is against the law to purchase police-specific equipment without a proper badge number and licensing.

Technology continues to develop for both personal and professional uses, and walkie-talkies are no exception to this. While the idea of listening in on police transmissions can be tempting, it is often not possible due to the encryption and security measures put in place to ensure the integrity of the police department’s communication.

Several laws are in place to prevent police equipment and internal communication from being accessed by the public on personal two-way radio devices, but in some states, it is legal to have a basic police scanner for personal use as long as it is not used to commit any crimes.

Do Cops Still Use Walkie Talkies?

Police officers throughout the world continue to use walkie talkies as their primary form of communication. This is because it is safe, fast, and secure, a trifecta which allows law enforcement to understand situations and response quickly and accurately. Many police forces, military units, and other emergency organization use walkie talkies around the globe.

What Channel Do Police Use On Walkie Talkies?

Police and EMS operate on official emergency channels which you cannot access without license, and if you do transmit on it, whether on purpose or by accident, you can actually get in very serious trouble! Because of this, if you do buy a high-powered walkie talkie / CB radio / HAM radio that manages to access these channels, you must be very careful.

Can Walkie Talkies Pick Up Police?

While your average consumer FRS / GMRS walkie talkie will not pick up police chatter, there are ways to listen in on police radio. You can buy a police scanner, which will allow you to listen in on police, fire, EMS, air traffic, and many other interesting channels. We’ve created a comprehensive Police Scanner Buyer’s Guide to help you find the perfect device to monitor local police and emergency communication.

Can Ham Radios Pick Up Police?

Yes, some ham radios can pick up police frequencies. This has actually been a big issue for the FCC over the years because they are frustrated by the widespread access to cheap radios like the Baofeng UV-5R which can be modified to listen in to police activity. You have to be very careful because it is 100% illegal to transmit over these protected frequencies, and even listening in can be dubious depending upon where you are or if you are using it to commit a crime.

Motorola makes many different kinds of radios for police, and it is one of the most popular options for police departments across the country. Many folks are interested in learning more about them or even acquiring one of these walkie talkies. If you’re interested in a Motorola police walkie talkie model that’s most similar to the full-blown law enforcement models, you can check out the Motorola RMU2080D below. It may meet your needs and allow to operate with a high level of power and range as well as strong battery life. 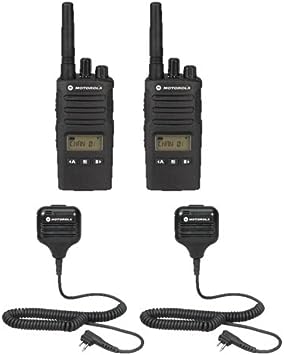 We've created a buyers guide that will tell you everything you need to know to buy the perfect walkie talkie.